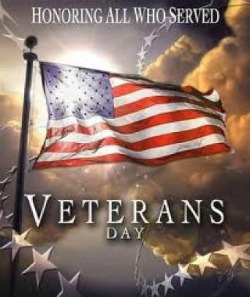 Today my words are “Honoring our Veterans.”

Today is is Veterans Day a reminder of all the men and woman who have heroically served our country and enabled us to enjoy the freedoms we enjoy each day.

When I was a child, the day to honor veterans was called Armistice Day. In 1921, Congress declares November 11th a legal Federal holiday to honor the soldiers who served in World War I. On June 1, 1954, November 11th became the official day to honor all our American veterans.

I am also delighted and honored to tell you about our dear friends, Colonel (R) Jill Chambers and country music star, Michael Peterson.

Colonel Chambers is the founder and CEO of This Able Vet, which supports the V-WISE  (Veteran-Women Igniting the Spirit of Entrepreneurship) program with a communications seminar focused toward a better understanding of the “why/how” choices individuals select, which make a difference in their lives.

Michael no only is a country music star, he is the  2008 recipient of the distinguished Bob Hope “Spirit Of Hope” Award for his service to the nation and the servicemen and women of the Armed Forces. Michael performs concerts for the American Legion all over the United States and has traveled to Iraq countless times to entertain our troops.

My husband and I are privileged to call Jill and Michael our friends and I am proud to be collaborating with Jill to introduce women veterans to the What Color Is Your Brain?® concept and book, as part of the V-WISE program to help Military Women Veterans re-launch into the world as entrepreneurs.

Remember to thank and “Honor Our Veterans,” not only on November 11th, but everyday!

November is National Diabetes Month. You can help create an awareness about Diabetes is to share information about Purr-fect Pals: A Kid, A Cat & Diabetes. My unique resource, picture and activity book is designed and written about our son and our cat, and to offers comfort, education and encouragement to children who are either newly diagnosed or have been living with the everyday challenges of Type1 Diabetes (T1D) and Type 2 Diabetes (T2D) and their families.