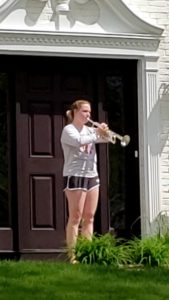 Yesterday, our neighbors, who are Air Force Veterans, asked their daughter to play Taps at 3:00 PM.  Jordan, our other neighbors, and I stopped whatever we were doing and went outside to stand on our front lawns to observe Taps across America. Taps was played twice, while we all stood at attention with our hands over our hearts to pay tribute to the fallen American Heroes who honorably served our country. Listening to the familiar melody was very emotional as you can tell by the way my phone was shaking.
I hope you will enjoy listening to Taps being played in our neighborhood.

So many memories stirred in my heart and mind as I listened:

• The recent military memorial service for our beloved friend, Len Birnbaum, who was the remarkable illustrator for Princess Shayna’s Invisible Visible Gift and a World War II veteran, who served in the Pacific theater of the war.

• The military funeral, 2 years ago, for our beloved New Jersey friend and neighbor Malcom Shreibmen.

• Sitting on the Lake Street curb, as a young girl, in front of the River Forest Bank with my father and always standing up to honor the WWI, WWII, and Korean War veterans and the American flag, as they marched past us.

• Memorial Day weekend also is very joyful time for our family because our younger son was born 46 years ago, on May 26th 1974.

I hope that Taps Across America in Our Neighborhood will be an annual tradition. Do you have memories about Taps and/or Memorial Day observances?