2. Diabetes, An Actress and A Royal Wizard- Princess Shayna Musical

When I read “Our first rehearsal for Princess Shayna was exhilarating” I knew I had to figure out a “Efficient Green Brain System” to help you and me keep track of my Princess Shayna Musical blog posts from director, Kim Woycke. A huge “Blue Brain Thank You” to my “Geen Brain” web designer, Jeff Lewis, owner of The Webs We Weave, who helped me solve the problem.

The new process is as follows: I will post the previous post at the top of my new post and list the older post(s) at the bottom in chronological order. That way it will be easy for all of us to share Princess Shayna’s Musical Journey.

Today, is the 3rd very “Yellow Brain Detailed” post from Kim. I hope you will enjoy the way Kim records and shares her enthusiasm and the student’s excitement about the musical.

“Our first rehearsal for Princess Shayna was exhilarating.  I have never had the opportunity to work with a group of students that displays so much enthusiasm, positive energy and excitement.  They are providing me with such an amazing gift – they are truly fueling my creative fire and inspiring me to reach for the stars and provide every opportunity I can for them.

This week, we offered auditions for our show.  Now, our auditions were far from a traditional musical theater audition.  I did not request that the actors prepare any material, instead I asked that they start to familiarize themselves with the characters we discussed last week, and come to the audition ready to explore and create!  No, realize that we held auditions to help us to determine which actors would portray each individual role for the show – not to determine who would be in the show.  All actors that signed up for the program were guaranteed a role, and a part that would allow them to showcase and develop their own talents.

The actors arrived in rehearsal, and we jumped right in.  We started by reading over the character descriptions that we created last week, and discussing any questions.  We then dove right into some scene rehearsals.  Auditioning with line-readings were a bit of a challenge for this production, as we don’t have a script!  So, simply for the purpose of our auditions, I typed up a few little scenes between some of the main characters.  (Luckily, the book has some wonderful dialogue, so this was very easy to do!  We basically had the actors read the dialogue right out of the book!).  The actors paired up and spent some time rehearsing their scenes.  After a few minutes of rehearsals, we were ready to audition.

Now, typically for an audition I would ask the actors to wait quietly in the hallway and call them in one-by-one to audition for me.  However, I felt it was important for our entire cast to watch this audition process.  Because we are doing this production as a workshop, our actors have just as much creative input as I do.  With that in mind, I wanted to involve them in the casting process.  I had all of the actors sit quietly in the front of the room and they each went two and a time to read various scenes.  The atmosphere in the room was so supportive, as each group performed and the other actors watched and cheered.

After the acting portion was finished, we then moved on to some singing.  This again proved to be a bit tricky, as we do not have any idea of what the musical requirements will be for this production.  We don’t know which characters may be required to sing solo, and what style or range of music we will have.  With this in mind, we decided as a group to allow each actor to stand and sing a small section of any song of their choosing, a Capella.  This was so much fun!  Not only did we get to hear a wide variety of song styles, from Broadway to pop to folk to gospel, but we also had a chance to learn a little more about the singing and what kinds of songs excite them.  I really applaud the actors for their bravery with this task, as singing unprepared and a Capella is a very vulnerable thing to do.  Again, the entire group was so supportive clapping and cheering for each cast member.

After the actors completed their acting and voice auditions, I wanted to provide them with the opportunity to give input on the casting of the show.  I asked the actors to spread throughout the room and to write down some suggestions to me for casting.  I specifically told them that I did not want them to tell me who THEY wanted to be, but instead to think about others, and who else in the cast you may feel shows strength for various roles.  I requested that they keep the sheets anonymous.  I collected the sheets, and was so pleased to see that the students picked up on many of the same qualities that I had.

I then split the actors into smaller groups and they worked on a brain color improve activity while I sat and cast the show.

15 minutes later, I was able to announce the cast to the group, and present them each with their very own copy of the book.  After casting the show, I dismissed the actors, but gave them the opportunity to meet with me to discuss why they were given their specific role.  There were a few actors that were disappointed, as so many had their hearts set on the role of Princess Shayna, however, after discussing why their unique talents and gifts would be perfect for a different role, and explaining to them the highlights of their own character, they quickly became excited.  The great thing about this book, is each and every character is so special and important.  It is apparent in Sheila’s writing how important the inspiration individuals were in her life, and that makes it very easy to explain to the actors how important their roles are.

After a thoroughly uplifting audition/rehearsal – I was left with one further surprise.

I have to start by explaining the most wonderful little message I received over the week.  I had one mother email me expressing that her daughter and friend (two of our actors) had spent the entire week writing and composing songs for our musical.  (Note, they had done this without even reading the book yet!  They were just so excited about the idea that they can write their own songs!) They wanted to share their music with me after rehearsal.  I wasn’t sure what to expect, but the two young ladies brought with them their violin, and sheet music that they had written, along with some wonderfully creative lyrics.  They had written 4 songs, one for each of the 4 villages to sing.  These songs were the perfect starting point for our musical endeavors, and just knowing that they had so much drive to write this material without ever being asked was thrilling!  It’s amazing how much can be accomplished with a little bit of passion.

This is going to be quite a journey.“

I am sure you will agree that it is thrilling journey to read how Kim and the students have created their “Kingdom of Kindness” at the Trilogy School of Performing Arts. They all understand and have shared the essence of Princess Shayna’s Invisible Visible Gift in such a genuine, creative and encouraging manner. 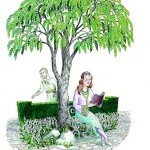 King Alexander and Queen Sylvia want to encourage you to subscribe to Sheila’s blog and her BrainBuzz Newsletter if you enjoyed reading this Princess Shayna Musical blog post and want to reading more.

Don’t forget, 10% of the royalties from the sale of Sheila’s books is allocated to JDRF (Juvenile Diabetes Research Foundation) .”