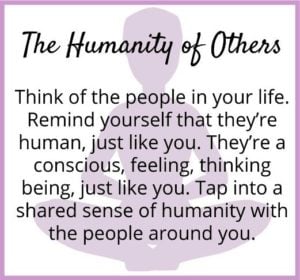 During the Coronavirus, we have  been reminded of the lessons of humanity in the newspapers, on the television, radio and/or our phones or tablets.  Today, I thought about the inspirational anecdote my Uncle Jerry, who is my mother’s 93 year old brother, contributed to my latest book, No Bunk, Just BS (Business Sense) Below is Uncle Jerry’s contribution:

A Lesson in Humanity by  Gerald M. Feldman
The most memorable and probably the most worthy life and business lesson I received was not at Lab-Line Instrument. It was on a Sunday afternoon at 1428 Clinton Place in River Forest, Illinois.

When I was 15 years old, my brother-in-law Al Newman, got me an after-school job as the “mail boy” at Precision Scientific. Via my daily mail rounds, I soon learned that Al was regarded as the operational head of the company, despite his title of Vice President. He was as tough as they came; feared and respected.

On that Sunday, my parents and I were visiting with my sister Sylvia. Meanwhile, Al was on and off the phone with what I presumed was Precision business. The phone calls went on all day and into the evening. Later that evening, the doorbell rang, and a man came in the house who I recognized as one of the factory workers. I remember how Al ushered him in. The man was very ill- at-ease, flustered, teary-eyed, and was clinging to Al’s arm.

Later, I learned that Al had been calling all over the country, taking advantage of his many hospital and laboratory contacts to get special care for the man’s desperately ill child. As usual, he got the job done and found medication for the child.

As important, to me at least, was the lesson in humanity I had witnessed. This tough-as-nails top executive cared enough about the “lowly” factory worker’s child that he gave up his limited family time and may well have saved a child’s life.

In the years that followed that Sunday afternoon in 1942, my Uncle Jerry served in the United States Army during WWII. After the war he attended Northwestern University on the G.I. Bill and graduated with a business degree. He was employed by several advertising agencies. Eventually,  he originated his own advertising agency, among whose valued clients were McDonalds, Abbott Laboratories, and my parents’ business, Lab-Line Instruments.

When I asked my Uncle Jerry for a Lab-Line reminiscence, I was expecting an advertising agency story. Instead, I was surprised and delighted by his story, which I had never heard before.

However, the story I had heard many times before was “Jerry the Match Maker” in which my mother enjoyed recounting how one morning, my father saw my mother walking Uncle Jerry to school.   He recognized that she was too young to be my uncle’s mother and was determined to find out the name of the beautiful young women with red hair and great legs! I am grateful that his determination was successful!)

Think about the lessons in humanity have you experienced. What were they?

You can purchase your copy of No Bunk, Just BS (Business Sense) for yourself and/or your staff at Amazon.

If you would like an Online No Bunk, Just BS Business Sense Program, I am available. Please contact me at sheila@sheilaglazov.com.